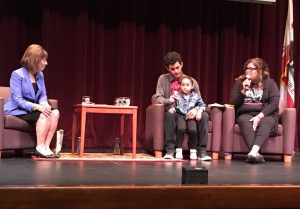 Parent Dorian Mateo and his daughter (center), sharing his experience with separation from his daughter with Congresswoman Jackie Speier (left)

On August 9th, Congresswoman Jackie Speier held a townhall meeting titled “A Conversation about America: Justice for All” at Cañada College to share with constituents her experience visiting the southern border, stance on supporting the end to family separations at the Mexican-US border and gun violence in the wake of the recent events throughout the country.  The parent leaders of Parent Voices San Mateo County attended the townhall to show their support for possible resolutions to the issues at hand.  During the townhall, a father who came to the United States with his four-year-old daughter to seek asylum from the violence plaguing his home country, shared his experience as a parent who endured months of separation from his child when he was detained by immigration officials.  As a resident of San Mateo County, Mr. Mateo is grateful to be reunited with his daughter and is slowing acclimating to life here in the Bay Area.  He feels supported by the community but worries about the long term affects of the separation for his daughter.

Parent Voices offered their support to Mr. Mateo and his daughter to ensure that they are able to settle into their community.  Several parents have offered to personally connect Mr. Mateo to resources in the community and to invite him to join our chapter of Parent Voices so that he can advocate for policies that support all families.  We are grateful to Congresswoman Jackie Speier for her work on the federal level to bring awareness to the issue of family separations and to pass legislation that will end such practices.